This panoramic painting and the infamous music-hall, the Moulin Rouge, are fraternal twins brought to life by the same man, Adolphe Willette. 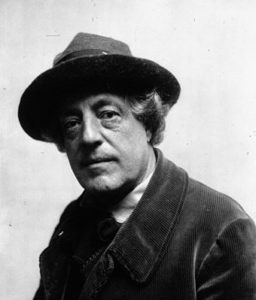 Willette painted the scene of Pierrot’s suicide and his funeral procession of revelers for a famous cabaret on the Parisian hill of Montmartre, Le Chat Noir (the Black Cat). The painting hung there as a prompt and a notice to its patrons: “Let us eat and drink, for tomorrow we die.” (Isaiah: 22:13) In the painting, a woman in full party mode rides the eponymous black cat. 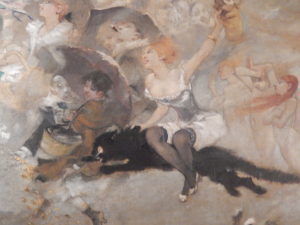 It was also Adolphe Willette who designed the Moulin Rouge. Besides the music-hall’s fabled whimsy and plush decadence, one of its striking features were walls and walls of mirrors. Why so many mirrors? Perhaps well-heeled Parisians who ventured up to Montmartre to shake off the Victorian restraints of bourgeois society not only came to be seen but also came to admire their preening reflections.

But why did Willette choose Pierrot, the original “sad clown” of western culture, to be his prime subject and poster boy of the party-till-you-drop decadence of fin de siècle Paris?

Look closely at Willette’s painting and you’ll see many renditions of Pierrot (in the foreground, right to left) with his signature skullcap and pale face: as a lad tossing away money, lifting a dancing girl, playing music, romancing a beautiful angel, tripping over himself with empty pockets, being relieved of his soul by a black-clad angel with dark wings, and finally, next to the lead nun carrying the cross, making his ascension to heaven. The painting is his biography.

Over the centuries, Pierrot’s constellation of incarnations in theater and art—from the bungling buffoon to the lonely sufferer whose only true friend is the moon—made him Everyman: the doomed innocent blessed and burdened with the follies, foibles, and fatal flaw of being human.

While Montmartre—with the Moulin Rouge as its most celebrated sanctuary—became known as a sprawling temple dedicated to music, dancing, drinking, and creative celebration in defiance of death, Montmartre rose from the ruins of an older temple: a Roman temple dedicated to their god of war, Mars. The ancient temple still casts its shadow in the name, “Montmartre.” 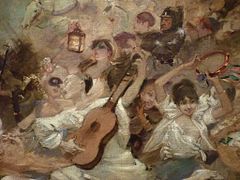 And what of Pierrot? Does he cast a shadow over the new world war in which we’re engaged? Does he loom over the tug of war in which Everyone holds the rope, the war between rejoicing and retreat, between “social” and “distancing”?

Stay At Home AND Go To PARIS!