You’ve seen her in the works of Henri Toulouse-Lautrec. But who was this extraordinary young woman? And why should Lautrec’s favorite poster girl of the Moulin Rouge-era be considered the first break dancer?

She was born Jeanne Boudin to a prostitute and violently abusive mother. At 12-years-old, Jeanne ran away. Living on the streets, she contracted St. Vitus Dance, a neurological disorder that causes involuntary tics and jerks in the face and limbs. It landed her in a hospital treating patients for “hysteria” and madness. After two happy years there, she was “cured.” At a costume ball and goodbye party for Jeanne, she discovered her love of dance, complete with a herky-jerky style inherited from her illness.

Escaping her mother again, 15-year-old Jeanne found refuge in the dance halls of the Latin Quarter, where her dancing style of grace punctuated by “fits” of wild movements thrilled onlookers. With her reputation growing, Jeanne changed her name to Jane Avril—“Avril” means “April” in French—to avoid being found by her mother. Avril’s lithe figure, marmalade hair and green eyes led to her first nickname, “Silk Thread.”

Mark Twain, who most likely saw Avril dance, described the cancan: “The idea of it is to dance as wildly, as noisily, as furiously as you can; expose yourself as much as possible if you are a woman; and kick as high as you can…Heavens!” While Avril added contortions and backbends that brushed her shoulders to the floor, the cancan could end with a leg held high in the air, the splits, or kicking off a gentlemen’s hat. 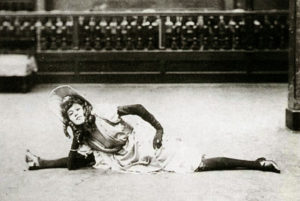 Avril’s cancan was unique in two ways. While the other women had to wear white undergarments, she insisted on wearing bright red bloomers, which caught the eye of Toulouse-Lautrec. He was enthralled by the bizarre contrast of her spins, kicks and explosive spasms and the sphinxlike calm of her face. (Love at first freakiness made them close friends.) Her possessed style earned her more nicknames: Crazy Jane and LeMélinite (a French explosive). 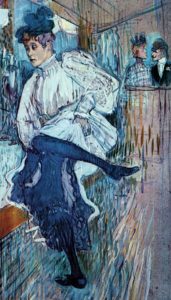 While the Moulin Rouge cancan was performed on the dance floor up close and personal (a precursor of the lap dance?) the Folies Bergère moved the cancan to the music-hall stage with a chorus of high-kicking demoiselles. 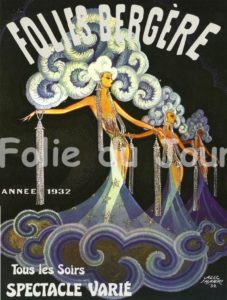 The Folies Bergère—still a fixture in Paris—exported the cancan to the U.S. in the form of Radio City’s Rockettes with their precision kick lines. 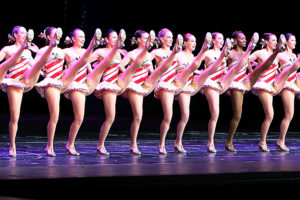 While Jane Avril is one of the grandmothers of the Rockettes, she wouldn’t approve of the cancan being stripped of its individual expression or the Rockettes’ frozen smiles.

Avril’s expression was—and always will be—aloof, mysterious, touched with melancholy. It was this paradox of her wild dancing and enigmatic face that made her so provocative. Her magnetic allure lives on in the works of her dear friend, Toulouse-Lautrec. 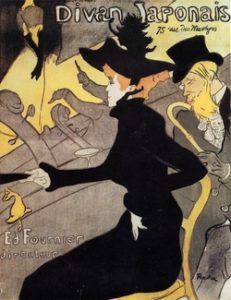 Stay At Home AND Go To PARIS!