On Nov. 2, they bagged another “first” when they took on the Princeton Tigers at the New York Polo Grounds, home of baseball and football. 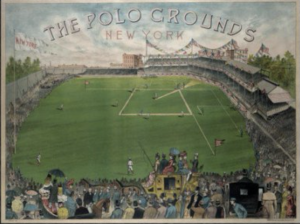 Despite torrential rain, 30,000 football fanatics crowded into the Polo Grounds to see Carlisle’s dazzling new style of play. They witnessed the one thing the Indians’ forward-passing and open-field running single wing couldn’t defeat: the weather.

In monsoon rain and a field of mire, the Indians  (7-0) suffered their first defeat. The Tigers mud-mauled them, 16-0.

Next: Harvard, and a first of a very different color.