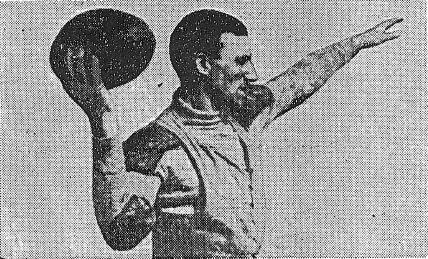 The tale is as wobbly as a bad spiral. Actually, the first passes weren’t spirals. They were lobbed like basketballs and thrown end-over-end like a kick.

One “first” forward pass was a ref’s blunder. In 1895, as North Carolina played Georgia Tech, the Tar Heels’ punter, about to be blocked, lobbed the ball forward to George Stephens, who ran for a 70-yard touchdown. The Bulldogs’ coach, Pop Warner, protested the illegal pass, but the ref had failed to see it. The TD won the game!

In a 1905 game between Washburn U. and Fairmont Co. (both in Kansas), the forward pass was allowed as an “experiment.” The first “legal” forward pass was tossed and completed, which is why Kansas claims credit for basketball and the first forward pass.

Time out for the origin of the spiral pass. In 1902, Hawley Pierce (ex Carlisle man), playing for the semipro Philadelphia Athletics, taught teammate, Howard Reiter, to toss an underhand spiral. Reiter’s arms being short, it was clumsy, so he threw it overhand. The overhand spiral was born four years before it was legal.

Finally, in 1906, St. Louis U.’s, Bradbury Robinson (pictured), with his long fingers, threw what most consider the first forward pass on Sept. 5 against Carroll Co. His first throw was incomplete and penalized by a turnover. The next throw found Jack Schneider for a 20-yard touchdown. The “long pass” had taken flight.

However, in its rookie season, the forward pass was ridiculed and called the “bastard” of football by…wait for it…Pop Warner .